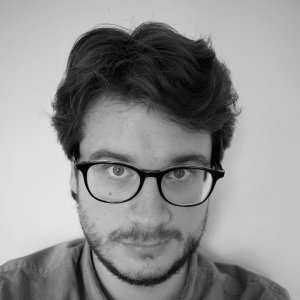 The surface of Griffy Lake was glistening bathed in the late Winter sun. The day was lovely as only those warm February days could be when you hardly need a jacket. It had rained the day before, the ground was soft, while patches of shade kept the memory of snow from last week. My wife and I were hiking the trail around the lake from Headley Road to Dunn Street for the first time. The water, from among the trees, was utterly translucent as it broke over the shore. The forest reminded me of home. Right then and there, one thought struck me like lightning. How did I, from the depths of Southeastern Europe, end up in depths of rural Indiana? When did this happen?!

It was year three of the infamous Public Sector Employment Ban in Serbia when I got my chance. The new coalition government of SNS (Serbian Progressive Party) and SPS (Socialist Party of Serbia), headed by the vice-chancellor (however contradictory that might sound), introduced this measure to combat the consequences of the (intensified) economic crisis which hit the country after the global crash of 2008. Design to limit the public sector to a reasonable size as well as to bring significant monetary savings, it seemed that the measure succeeded at everything but its intended purpose. I do not feel well equipped to judge its potential economic benefits; however, the subjective feeling was that the measure's primary function was to provide a mechanism for the employment of Party cadre. When looking for interviewees on the subject, it is hard to find a household or a family without at least one member who had to join the Serbian Progressive Party or to participate actively as a condition for a position in the public sector - whether it is education, healthcare, public service, or law enforcement. Most of them are employed on part-time contracts to guarantee their loyalty and obedience. Many that were already public sector employees had to take the same step to keep their jobs. Of course, the evidence to support these claims is always circumstantial, and the people who suffered that fate are never willing to speak publicly out of fear of losing their positions. In the streets, parks, social media chatrooms, those information circle more freely.

All these years, apart from the endless paeans by the ruling coalition about the economic growth, overall prosperity, the standard of living increase, investments and jobs added, we kept hearing – somewhere from the back – about the constant population decrease and migrations. Often drawing the parallel to the mass exodus during the wars of the 1990s, we are hearing of hundreds of thousands of (mostly young) people who left the region in the past few years. Nobody probably knows the exact number of those who left the Balkans permanently or temporarily, but even the available figures paint a gruesome picture. According to the Eurostat website, around 200.000 people from Serbia obtained their EU residency between 2013 and 2018, 52.049 in the last year alone.1 The data for Albania, Kosovo, Bosnia and Herzegovina, Montenegro, North Macedonia, and Turkey (countries in the process of EU accession) are as equally as devastating.

We will probably never know how many people left outside of the formal means of emigration. As far as my generation goes, those born in 1990 and later, more of my friends and acquaintances are working on cruise ships, as English teachers in China, or has decided to stay in the US illegally after Work & Travel Program, than there are of them in Serbia. Moreover, we keep hearing about doctors and medical staff who are permanently leaving Serbia because they failed to get employed before lifting the Employment Ban in 2020. The numbers are just subject of speculation. The director of the Serbian Medical Chamber, Milan Dinić, speculated in 2019 that the country loses around 300 doctors per year.2 It is up to us, individually, to ask ourselves, how many cases of that do we all know? As far as the consequences go, the current situation with the CoVid-19 shows us the full extent of the accumulated problems. In that context, the government's calls to the ex-pat doctors to come back as volunteers to the "motherland" and help its struggle are especially hypocritical, coming from the same institution that was trying hard in the recent past to deprive them of that sense of belonging.

Until that 2016, between the first and second year of my doctoral studies, with a BA and MA in history, I have not had a single day of working experience – in any position. I was sending out hundreds of resumes (often polished of even false) for whatever job, in whatever sector – with no results. According to Statista, the youth unemployment rate in Serbia in 2016 was above 34%. A drop from the 43% in the previous year, the number was a testament of the troubled condition, far away from the European average.3

Extremely negative and unrelenting, the statistics show us only one portion of the sad story behind the emptying of the Balkans countries. The second part of the story is the answer to the question, "What is the cause?" What can be identified as a universal characteristic of the region is the total absence of a vision for the future or a strategy for attaining higher standards in all aspects of life. Living under the rule of extremely corrupt regimes, based on very questionable democratic principles – if democratic at all, in some cases4 – it is tough to envision yourself as a productive member of the society. The cause of frustration expressed through active resistance or apathy among the youth is the lack of a bulwark against the devastating effects of politics that is asking for nothing more than obedience and the service to the interests of the ruling caste, here and now! In that case, all you can hope for are crumbles from the table, short term. Otherwise, the public space (as well as private, it would seem so recently) remains closed for all of us on the path of personal and collective actualization. Not able to find any, let alone an adequate job, to advance in any way, to participate in the public space, or to feel acknowledged and respected, the Balkan youth is losing hope for progress and belief in change. And that is just a portion of the reasons why the young are more and more boycotting the elections and voting with their feet. Unless there is a profound shift in the kind of work and determination appreciated, and unless personal quality becomes a virtue again, the situation will not change. For many, as for me, the situation changed by leaving the Balkans. Unfortunately, we are still discussing the causes and effects – the solutions are not even in sight.

Authoritarians vs. Liberals: an Emerging Ideological Divide in the Western Balkans?

It is obvious that our own authoritarians are the main obstacle to political...

Fikret Abdić, the Mayor of Velika Kladuša and several of his...

Toto, We're Not in the Balkans Anymore (2)

The American embassy in Belgrade radiates with an ominous feeling, a perfect...