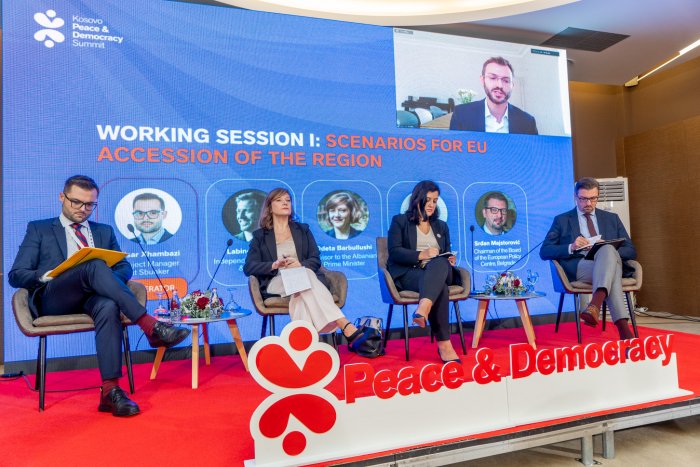 Prishtina, September 21-22, 2022: Three civil society organizations from Kosovo, New Social Initiative (NSI), S’bunker and the Kosovar Centre for Security Studies (KCSS), with the support of the Atlantic Council and the generous support from the National Endowment for Democracy (NED) and the Rockefeller Brothers Fund (RBF), organized the first edition of the Kosovo’s Peace and Democracy Summit (KPDS) from September 21st to 22nd. The goal of the summit was to help build momentum for normalization of relations between Kosovo and Serbia, which is seen as a precondition for the development and the European integration of the region of the Western Balkans.

Agon Maliqi, head of the board of Sbunker, said in his opening remarks explained why the topic of “Building momentum for normalization of relations between Kosovo and Serbia” was chosen as a topic for the first edition of Kosovo’s Peace and Democracy Summit: “The first is the pivotal moment in European security in light of the war in Ukraine. This affects all of us and makes our regional problems even more important and urgent to address. This is not a problem that will go away but will likely get much worse before it gets better. The second is our sense of responsibility to do something as civil society to address these regional and European problems, in two ways

Jovana Radosavljević, the executive director of the New Social Initiative (NSI) stated that the civil society sector is a rare healthy tissue of Serbian-Albanian relations but the cooperation is not without its challenges, and that NSI works to create the environment for honest discussions in which there were no taboos and discern between true emotional drivers of the ethnic communities and the political spins. Furthermore, she argued that it is important for the dialogue process to have an understanding and deal with the real issues affecting the lives of the communities, and especially, in our case, the Kosovo Serb community: “This is especially important because, among other things, the Brussels dialogue process did rob the Kosovo Serb community of political agency. We can say that what we had to say did not always matter, but we did feel heard and to some point – influential. This gave us the drive to continue, and this is why we are here today.”

Mentor Vrajolli, the executive director of the Kosovar Centre for Security Studies (KCSS), stated that “our goal with the Kosovo’s Peace and Democracy Summit is to facilitate and shape a public and regional dialogue on the challenges and opportunities to advance peace and democracy in our societies.” Furthermore Mr. Vrajolli argued that the civil society wants a solution to bilateral disputes in the region, and “especially we want to see a solution that is sustainable to the Kosovo and Serbia dispute, and we also stand ready to help achieve this goal and bring our countries closer to the European Union”.

In a speech for the KPDS Manuel Sarrazin, the Special Representative for the Countries of the Western Balkan in the German government said that "The past and future of the region is linked to the European promise and all our efforts are trying to work in favor of this idea". Cynthia Cook, Deputy Political Chief, U.S. Embassy in Kosovo, noted that "Ukraine created a new sense of urgency. We continue supporting the EU-facilitated dialogue based on mutual recognition. EU Integration will bring more opportunities to both countries". In a conversation with Maja Piščević, Non-Resident Senior Fellow with the Atlantic Council's Europe Center, Damon Wilson, President and CEO of the National Endowment for Democracy (NED), stated that “Now more than ever, it’s the time for a bold move, to consolidate the future of Western Balkan societies.”.

During the two days of the KPDS a range of studis and policy papers were discussed. A brief prepared by the New Social Initiative (NSI) based on inputs from 13 experts, examined the potential four scenarios fo a peace agreement by 2027 between Kosovo-Serbia and it was presented by Shpetim Gashi and Jovana Radosavjlević. The purpose of the paper is to examine potential future scenarios of Kosovo-Serbia relations and encourage a public debate on the key assumptions necessary to bring those relations to the best possible place and warn of those that would lead them in the opposite direction. A panel consisting of Blerim Shala, former Coordinator for the Brussels Dialogue in the Office of the President of Kosovo, Sonja Licht, President, the President of the Foundation BFPE for a Responsible Society, and Damir Marušić, Senior Fellow with the Atlantic Council, Washington D.D. You can download the paper on the following link - https://newsocialinitiative.org/kosovo-serbia-by-2027-four-most-likely-scenarios/

In another panel a policy paper “The Western Balkans EU accession perspective after the war in Ukraine” was presented by Labinot Hoxha, and discussed by a panel consisting of Odeta Barbullushi, Advisor to the Albanian Prime Minister, Simonida Kacarska, Director, European Policy Institute in Skopje and Srđan Majstorović, Chairman of the Board of the European Policy Centre, Belgrade. You can download the paper on the following link - https://sbunker.net/publikimet-organizata/91493/the-western-balkans-eu-accession-perspective-after-the-war-in-ukraine/

The concluding panel of the first day of the KPDS, focused on “Resolution of regional bilateral disputes: Changing the narrative from risks to opportunities'', which was started with a presentation of the Sbunker’s paper “The opportunity costs of the Kosovo-Serbia stalemate” prepared by Marko Savković and Bernard Nikaj. The panel discussion consisted of  Ditmir Bushati, former Minister of Foreign Affairs of Albania, Nikola Dimitrov, former Deputy Prime Minister of North Macedonia, Jovana Marović, Deputy Prime Minister of Montenegro and Visar Ymeri, Executive Director Institute for Social Policy “Musine Kokalari”. You can download the paper on the following link - https://sbunker.net/publikimet-organizata/91494/opportunity-costs-of-the-kosovo-serbia-stalemate/

The second day of the KPDS started with a discussion on Civil society’s role in conflict disruption, and presentation of the Sbunker’s paper “Mapping and analyzing institutional mechanisms and civil society initiatives aimed at disrupting conflict potential” prepared by Ramadan Ilazi and Teuta Avdimetaj which examines the government and civil society institutions and practices that enable diffusion of ethnic-based tension in Kosovo, North Macedonia, and Serbia. The panel discussion on the topic was moderated by Zana Cimili, TV correspondent for N1 and consisted of Belgzim Kamberi, Institute for Social Policy Musine Kokalari from Kosovo, Vlora Reçica, Institute for Democracy from North Macedonia, and Sofija Todorović, Youth Initiative for Human Rights from Serbia. You can download the paper on the following link - https://sbunker.net/publikimet-organizata/91492/mapping-and-analyzing-institutional-mechanisms-and-civil-society-initiatives-aimed-at-disrupting-conflict-potential/

The Kosovo’s Peace and Democracy Summit concluded with a joint statement that appeals to Kosovo and Serbia to normalize their relations, and promote regional cooperation.

Care work is crucial to human well-being and social and economic development....