The Vetëvendosje (LVV) MP Artan Abrashi has disseminated an unverified document on his Facebook account, claiming that the Serbs are mobilizing. According to him, in the document issued by the Ministry of Interior of Serbia, a warning is given to the Serbian army and police about unknown events that are expected to happen on September 24. Abrashi also connected these events with Kosovo.

“After the mobilization in Russia, there is also mobilization in Serbia,” he wrote on Facebook, where he attached to the description the document in the Serbian language, which bears the seal of the Ministry of Internal Affairs and the so-called Union of Police Workers.

In this document distributed by the Union of Police Workers it is stated that: “with regard to global events, which are expected to happen on September 24, 2022, do not create fear and panic because everything will end well. Everyone must go through this period, especially those who have not understood the truth and those who have believed (the mass media and the politicians). And it is not only about Serbia, but about all the countries. A special request to all members of the army to be in their barracks and members of the police to be near important facilities.” 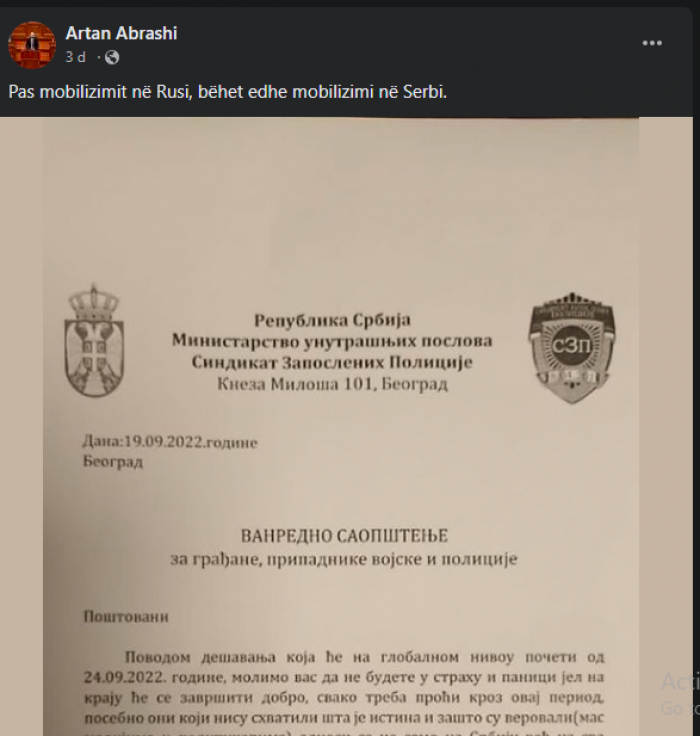 The so-called Union of Police Workers has over 26,000 followers on their Facebook account. But apart from the publication of this document, no additional information has been given about the supposed events that will take place. Nor has there been any official public statement from the government of Serbia about them.

Some of them have qualified as surprising the deputy Abrashi’s act who disseminated an unverified article, linking it with the developments in the relations between Kosovo and Serbia.