On September 26, 2022, the media in Serbian language “Novosti” published a news with the claim that a convoy of cars of the Kosovo Security Force (FSK) passed through Zubin Potok. It made the claim without relying on reliable sources of information. The largest political entity representing Kosovo Serbs, “Lista Serbe” (LS) and the director of the so-called Office for Kosovo in the Government of Serbia, Petar Petkovic, reacted regarding this issue. 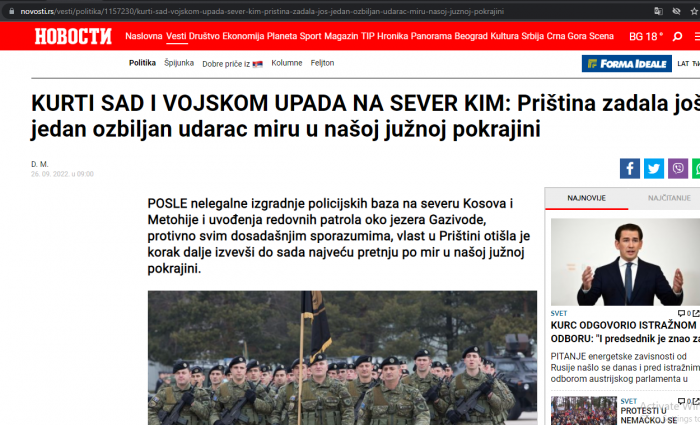 “After the illegal construction of police bases in the north of Kosovo and the introduction of regular patrols around Lake Ujman, contrary to all previous agreements so far, the authorities in Pristina went a step further by jeopardizing/threatening the peace in our southern province” is said in this reaction.

Whereas Lista Serbe wrote on its Facebook account: “The illegal incursion of members of the Kosovo Security Forces in the territory of the municipality of Zubin Potok is a serious violation of the 2013 agreement, guaranteed by NATO, which guarantees that no armed formation of Pristina can occupy the Serbian municipalities in the north without the approval of the mayors of these municipalities and the KFOR commander.”

Moreover, Petkovic himself reacted by saying that, “this is a direct violation of the 2013 agreement with the Secretary General of NATO, according to which members of any military formation coming from Pristina do not have the right to stay in the north of Kosovo and Metohija without the double approval of KFOR and the four Serbian presidents from the north.” This news was also distributed by other Serbian media such as: Pravda.rs, Kurir.rs and Politika.rs.

But the Minister of Defense of the Republic of Kosovo, Armend Mehaj, has denied the information distributed by Serbian officials regarding the presence of the KSF in Zubin Potok.

“The Ministry of Defense denies the false news that has circulated in some Serbian media about the alleged movement of KSF troops in the area of the municipality of Zubin Potok. We carry out all training and operational activities in cooperation and coordination with local and international authorities, respectively KFOR, in accordance with our constitutional and legal mandate,” Mehaj wrote in his post. The Ministry of Defense has also distributed the same reaction, but only in the Albanian language.

According to a 2013 agreement between the institutions of Kosovo and NATO, which continues to be in force, the KSF can be placed in the northern municipalities of Kosovo only with special permission from the KFOR Commander. In the letter exchange between the former president Hashim Thaqi and the general secretary of NATO, guarantees are given that the KSF “will undertake a mission in the north of Kosovo only with the prior agreement of KFOR.”

Despite the claims of Serbian officials, such a permit does not apply to the Kosovo Police (KP), which has a mandate to extend rule of law and fight smuggling throughout the country. The Serbian officials, in some cases, have qualified it as pressure on the population in the north, the actions of the KP to establish law and order in that part as well.