The so-called “Office for Kosovo” in the Government of Serbia has reacted again after another attack on two Serbian citizens. The attack has been interpreted as a consequence of the policy of the official Pristina and the Prime Minister of Kosovo, Albin Kurti, but without giving any facts about this and not referring to any policy of the Kurti Government in relation to the non-majority communities in Kosovo.

The communiqué of this office states that on the evening of September 12 in Babimoc, Obiliq, two citizens of the Serbian community, Nemanja Mitrović (19) and his father Sasha, were stabbed with a knife by two Kosovars who had harassed them for a long time. In the communiqué, this office does not give any details about the motives of the attack, in which cases the “harassment” occurred earlier and many other necessary clarifications to qualify the incident as inter-ethnic hatred and instigated by the Kurti government. This office accompanied the communiqué with the photographs of Serbian citizens who sought help in hospital.

“The attack on Mitrović is a consequence of the anti-Serb policy and the irresponsible, inciting statements that come every day from official Pristina and Albin Kurti, who in this way targets the Serbs. This disturbing incident has scared and worried the Serbs who live there, who do not feel safe even inside their homes,” says the statement of the “Office for Kosovo.”

Regarding the attack, clarifications were given in the report of the Kosovo Police, where it is said that there were serious bodily injuries as a result of carrying unlicensed weapons, by the attackers.

“Two Kosovar male suspects have been arrested under the suspicion that due to a momentary dispute, they physically attacked the two Kosovar male victims with a sharp knife. The victims suffered injuries and were sent for medical treatment, and according to doctors, their condition is stable, and one of them has been released. By the decision of the prosecutor, the suspects were sent to detention after the interview,” the press release of the KP states. Unlike the “Office for Kosovo,” the KP has not mentioned the motives of the attack while adding that the case is being investigated by competent police units.

The media in Serbia also reported on the reaction of the “Office for Kosovo,” putting it as the main news on their front pages. Most of these media are also distributed in areas populated by Serbian majority in Kosovo. 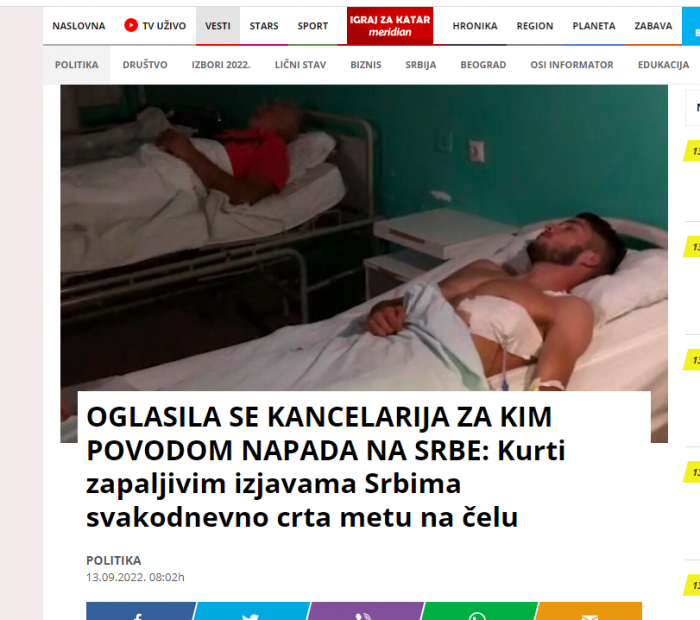 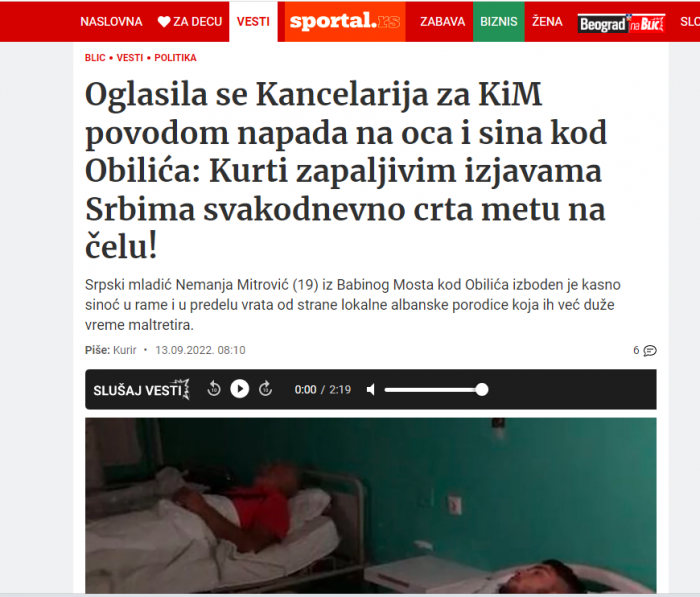 The serb media Kosovo Online and Tvmost.Info have also distributed this news. Meanwhile, the Kosovar media also reported on the incident, attaching the Police report with additional clarifications.

This is not the first time that the Serbian Office for Kosovo draws unfounded conclusions about the motives of the attacks, without allowing the final word to be said by the responsible investigative bodies. There is also no official anti-Serb policy of the Government of Kosovo, as claimed by the so-called “Office for Kosovo” in the Government of Serbia. In addition, the main government department that deals with the rights of communities in Kosovo is led by Minister Goran Rakić from the ranks of the Serbian List.