The so-called Office for Kosovo in the Government of Serbia continues to claim that attacks on Serbs in majority Serb municipalities are carried out with the aim of intimidating and expelling Serbs from Kosovo, alluding to an alleged 'ethnic cleansing campaign' of the Serbian population led by the institutions of Kosovo. In the announcement of this office, it is stated that an 84-year-old woman was brutally beaten on Thursday and Friday evening in her home in the north of Mitrovica, and that she is a victim of the ‘worst thugs and criminals and the atmosphere of violence that is created by Pristina recently'. Without any evidence regarding the identity of the persons who caused this attack, this office has alluded to the Albanian ethnicity of the perpetrators. 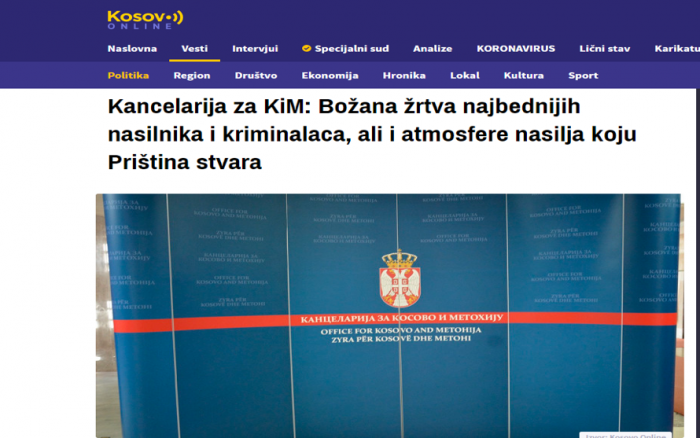 “We expect the perpetrators of this terrible attack, who according to the victim's testimony spoke Albanian, to be brought to justice as soon as possible and to determine whether the motive for the attack on Bozhana R. was only personal interest, or whether the attacker's motive was also to intimidate the Serbs in the north of Kosovo. This kind of attack on Serbs and their property usually remains unexplained, especially in the south of the Ibri, where the Kosovo Police, instead of intimidating the Serbian people, must face once and for all the great accusation of Albanian extremism directed at anything Serbian,” this statement says.

In relation to this statement, the Kosovo Police reacted, where in an explanation for the media it said that this office continues to deceive and misinform the public regarding specific cases that happened in Kosovo, and in the 24-hour police report it was said that this case is evidenced as a robbery and that they are intensively investigating the incident, but so far, the motive seems to have been financial gain, so it cannot be connected as a case with inter-ethnic elements.

“Str. Qeta e Minatorëve, Mitrovicë 25.08.2022 – 22:40. The Kosovar female victim reported that while she was staying at her home, two masked suspects entered and threatened and physically assaulted the victim and demanded money from her. As a result of the physical attack, the victim suffered bodily injuries, for which she received medical treatment. There is no report of arrest, the case is under investigation.”