Petar Petkovic's misinformation in the controversy with the German ambassador

Serbian officials are keeping an eye on foreign diplomats in Pristina too, reacting to their statements. Often, they are doing this by misinforming and misinterpreting the Brussels agreements and the decisions of the Kosovo government. Thus, the director of the so-called Office for Kosovo in the Government of Serbia, Petar Petkovic, reacted on Twitter to the statement of the German ambassador, Jorn Rohde, from the meeting with President Vjosa Osmani.

“Pleasure to meet President Vjosa Osmani today to discuss current developments, including the decision to postpone the implementation of the decision on registration plates and entry-exit documents until September 1, in coordination with the US and the EU. I emphasized that the decisions are legitimate and in full compliance with the Brussels agreement,” Rohde wrote on Twitter. 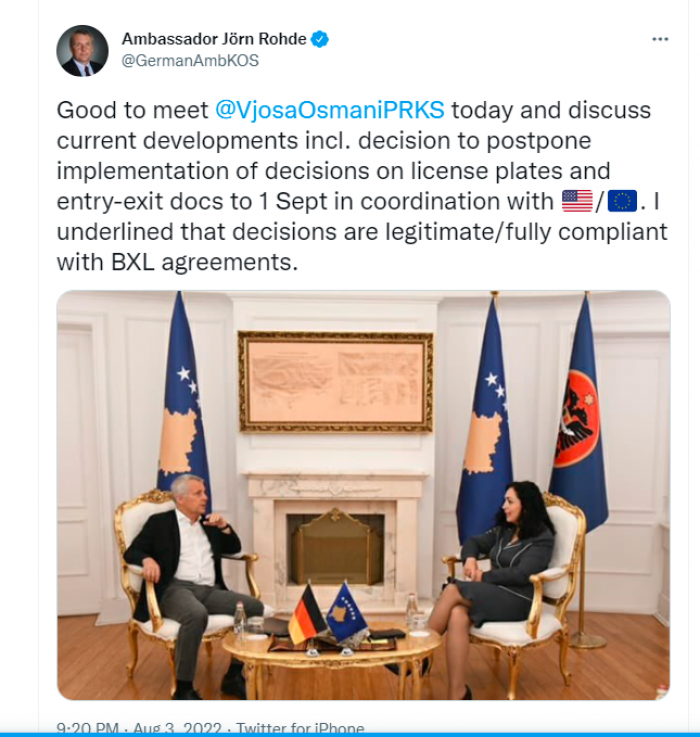 Meanwhile, Petkovic's reaction to Ambassador Rohde's statement is that he is not telling the truth regarding the decisions on reciprocity for license plates and IDs. Petkovic repeated the misinformation that according to this decision all Serbian citizens will have their identification documents confiscated by the border police. In this response, the Serbian official listed several questions, in which he misinformed, saying that Serbs' personal documents are being confiscated.

Ambassador Rohde responded to this statement, as he reiterated Germany's position regarding the Association and other agreements.

“Dear, Mr. Petkovic, yes, all Brussels agreements must be implemented. For your information: I have stated many times that the creation of the Association of Serbian Municipalities should be addressed, I have recently said it openly on Television “Slobodno Srpski” and “Kallxo Përnime,” and in bilateral meetings with the government of Kosovo on a regular basis,” Rohde wrote.

That the statement about the confiscation of personal documents is a pure misinformation of this Serbian official is also confirmed by the fact that within a few hours after the additional documents were issued by the institutions of Kosovo, not a single document of any Serbian citizen was confiscated. The Prime Minister of Kosovo, Kurti, also reacted to this false information.

“I heard about the fake news that Serbian documents will be confiscated at the border, it is not true. On August 1, more than 2,000 documents for entry and exit were issued. We are living in challenging times and we need extra care. Disinformation poses quite a risk. Our information campaign will continue when our two decisions resume. The barricades that are placed in the north come from above,” said Kurti.