The implementation of the decision of the Government of Kosovo on the application of reciprocity in license plates and ID cards brought back the blockades at the border points towards Jarinja and Bërnjak. The situation escalated a few hours before the decision issued on June 29, 2022 came into force, where the Serbs placed heavy transport vehicles on the main roads leading to the border crossings with Serbia. There were also shots fired at the cordon of the Kosovo Police (KP), but according to the authorities, none of them were shot. However, according to the Minister of Internal Affairs, Xelal Sveçla, 11 citizens were injured and several cars of citizens and KP were damaged by the developments on Sunday.

On the other hand, Serbian officials through the Serbian List as usual dramatized the situation, describing the government's decision as an attack and pressure on the Serbian population, while also mentioning the war in the name of self-defense. The blockades were preceded by a disinformation campaign and wild propaganda against Serbian citizens saying that the Government of Kosovo is aiming to take away identification documents from Serbs to make it impossible for them to live in Kosovo.

President Aleksandar Vucic convened the Security Council on Sunday and said that the Serbs “have their backs against the wall,” while drawing parallels with the Slobodan Milosevic period. 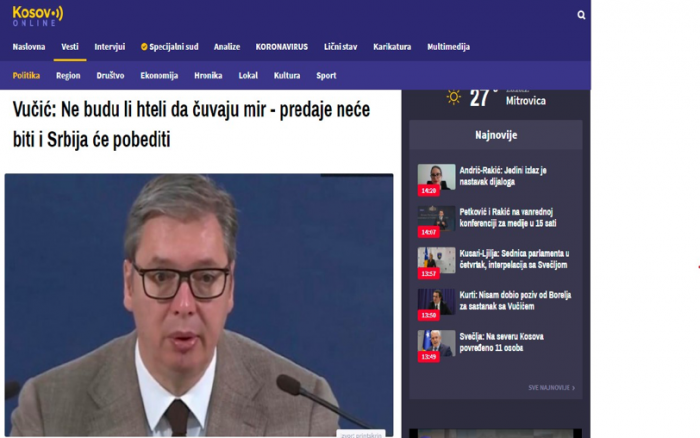 It is not at all surprising that in every statement and disinformation campaign of Serbian officials regarding Kosovo, we almost immediately have the stance of the officials of the Russian Federation. Thus the spokeswoman of the MFA of Russia, Maria Zakharova, wrote on Twitter: “The decision of the 'authorities' in Pristina to start applying unjustified “rules” for the mandatory reissuance of personal documents and license plates for local Serbs from August 1 is another step towards the expulsion of Serbs from Kosovo.”

Despite the request of the Western powers, Serbia is among the few countries in Europe that refuses to impose sanctions on Russia after the aggression on Ukraine. 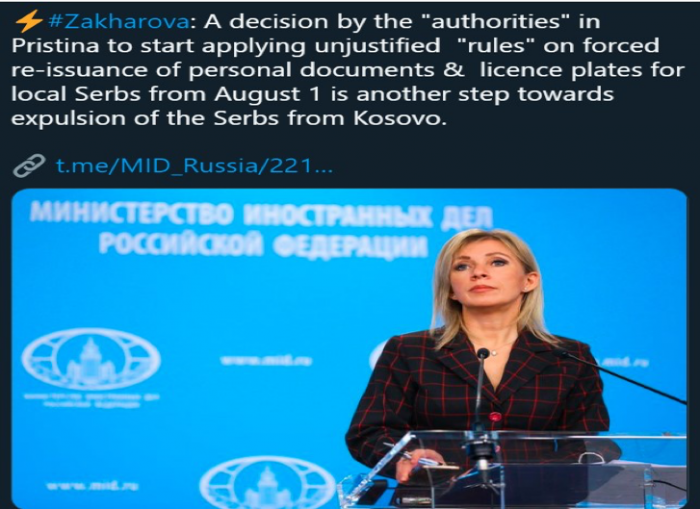 The tense situation in the north activated the ambassador of the United States in Pristina Jeffrey Hovenier, who on Sunday evening met Prime Minister Albin Kurti, President Vjosa Osmani and Minister of Foreign Affairs Donika Gërvalla. After the meeting, through a statement to the media, the American ambassador said that he has asked the leaders to postpone for 30 days the implementation of the decision on identity cards. Based on his request, shortly before midnight when the decision would come into force, the government announced its postponement, provided that the barricades are removed from the streets.

Prime Minister Kurti in a joint conference with Minister of Internal Affairs Xelal Svecla singled out Serbia's disinformation campaign as a factor that fueled the resistance against the government's decision.

“Citizens of Serbian nationality in Kosovo have been bombarded by fake news from Serbia about how something is being prepared in Kosovo, which when they didn't call it 'Olluja' they called it 'Hell.' So Serbian citizens have been subjected to a vicious disinformation campaign. This has been the concern of the United States of America and the European Union, and we understand it,” said Kurti.

However, it is important to note the fact that for more than a decade, the government of Serbia has been doing the same for all citizens of the Republic of Kosovo. So, every citizen of Kosovo to cross the border with Serbia must be equipped with a document issued by the Serbian state. 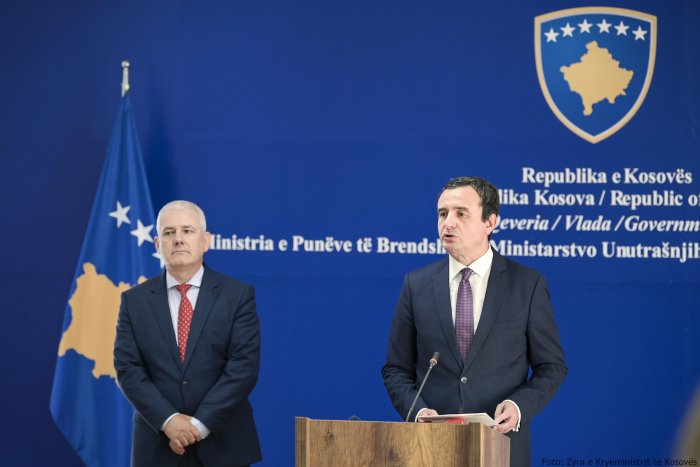 The decision to remove illegal license plates, as well as impose reciprocity on identity cards, was taken after the failure to reach a permanent agreement on license plates in Brussels.

The decision obliges Serbian citizens to replace their illegal license plates of Serbia with RKS ones, as well as establishes reciprocity for the entry of citizens of Serbia into Kosovo.

Every person who appears to cross the state border with a personal identification document issued by the Serbian authorities must be provided at the border crossing points with a declaration sheet that temporarily replaces the use of such a document.

Just as in October 2021 when an action by the Kosovo Police to combat smuggling encountered resistance from the Serbs, so now too the government's actions to establish law and order in the north the official Belgrade has interpreted as pressure on the Serbian population in Kosovo. The country's authorities have confirmed several times that local Serbs continue to be manipulated through parallel structures, empowered by Serbia in the north, despite Brussels' agreements to put an end to their presence. Their presence has also been confirmed by the European Union, which mediates the Kosovo-Serbia dialogue process.