From Kosovo, President Vjosa Osmani participated in this meeting, who during her speech said that the citizens of Kosovo are discriminated against, even though they are the most pro-European people and meet all the conditions for visa liberalization, but they still remain isolated in the heart of the continent where they live.

“The irony is that we are here as equal members of the international community, discussing the European agenda, but of course I sit among you here today as the only person - the only person - at this table who needs to get a visa to participate in this summit,” said Vjosa Osmani.

Thus, the media have continued to report on the issues that were discussed in that meeting. But, in order to misinform the public, the Facebook page, Analiza with over 57 thousand followers, has published the news with the misleading title “The Prime Minister of the Netherlands has said "No visa for Kosovo, they don't deserve it!” 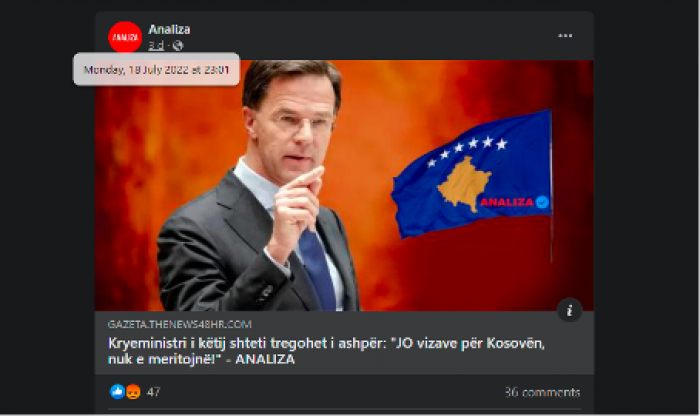 Meanwhile, if you click on this page on Facebook, you will be taken to another website gazeta.thenews48hr.com which published the same news, immediately after the EU summit, which means they repeated the same news twice.

In the content of this news it is claimed that Rutte has said that Kosovo is taking positive steps towards visa liberalization and that Kosovo has made progress in this regard, but not enough. So, the headline of the news is misleading because it claims that the Prime Minister of the Netherlands reacted harshly, allegedly saying “no visas for Kosovo because they don't deserve it”. So this is fake news and misinformation.

While, on the other hand, fake news with supposed dates about when and how the visa liberalization will take place continue to circulate.

The title of the news is “Latest news: From the Ministry of Donika Gërvalla comes the news of when visa liberalization will take place,” while the news does not give any date when this will happen, the news only says that there is a possibility that soon Kosovo citizens will move freely. Therefore, the title of this news is false and misleading because it does not match the content.