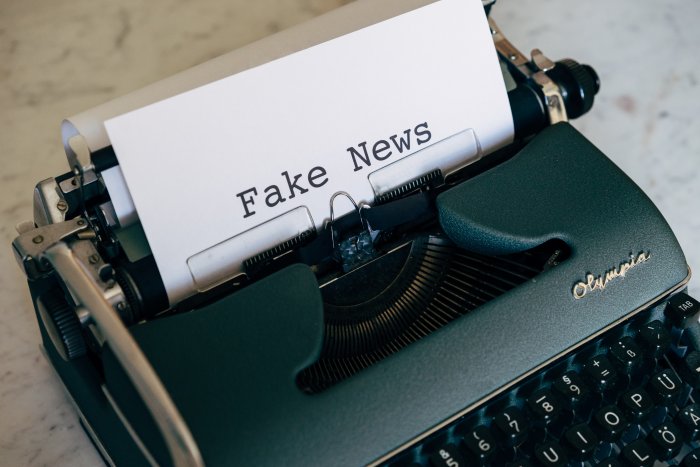 The initiative of the three countries of the Western Balkans, Serbia, Albania and Northern Macedonia, known as the "Open Balkans" continues to be one of the most controversial topics in Kosovo and the region. The last meeting of this initiative, which was organized in Ohrid, Northern Macedonia, on June 8, in addition to member states, in the capacity of observers also were Montenegro and Bosnia and Herzegovina. On the other hand, Kosovo was the only country in the region that rejected the invitation of the Prime Minister of Northern Macedonia, Dimitar Kovacevski, to participate in this meeting.

However, what sparked more debate about the meeting as well as the "Open Balkans" initiative was the supportive statement by Russian Foreign Minister Sergey Lavrov, who criticized the EU saying “they did not want us to express our support for Belgrade, including the Open Balkans project. It is now clear to everyone that Brussels, NATO and the EU want to turn the Balkans into their project called the Closed Balkans.”

This statement provoked a series of reactions in Kosovo regarding the Open Balkans, saying that, since the initiative received “support” from the Russian diplomat, not only should it be rejected by Kosovo institutions, at the same time there should be caution because this initiative may be pro-Russian and pro-Serbian.

Such a misleading interpretation was made by the Chief of Cabinet of President Osmani, Blerim Vela on his Twitter account, at the same time spreading the news that Lavrov supports the “Open Balkans.” In this case, Vela has distributed a link by the State News Agency, Tass, which in itself is a problem, given the fact that the Independent Media Commission, in order to prevent misinformation of public opinion, has temporarily stopped broadcasting channels originating from the Russian Federation in Kosovo. 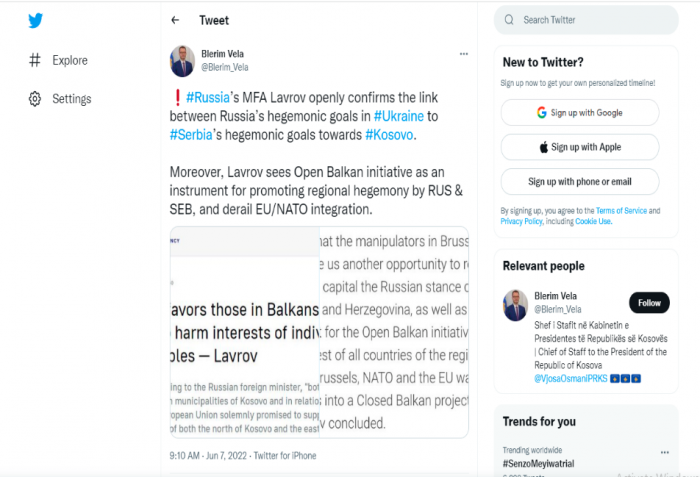 Furthermore, the claims of the Russian Foreign Minister have been questioned by both the participants of this meeting and the US Ambassador to Belgrade. US diplomat Christopher Hill said he was there to support the Open Balkans and that Lavrov was sarcastic because he does not support the initiative. Similar reactions in support of this initiative came from the US Special Envoy for the Western Balkans, Gabriel Escobar, and the EU Commissioner for Neighborhood and Enlargement, Olivér Várhelyi. 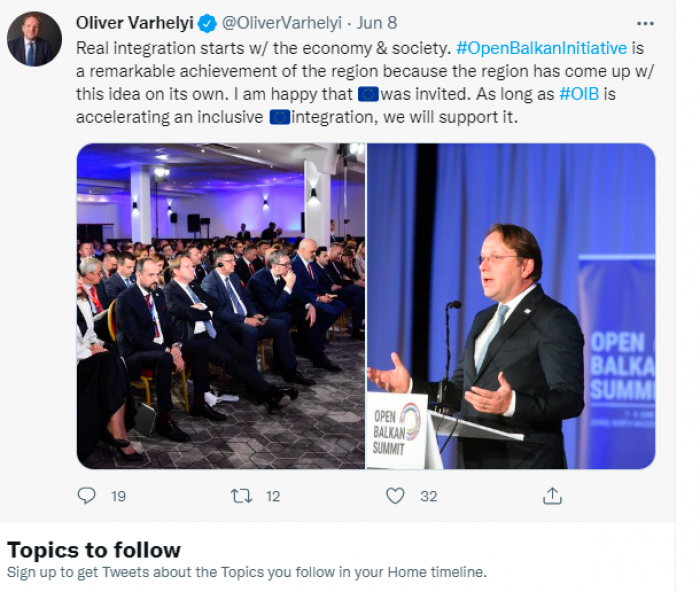 But there were also contradictory statements about Kosovo from the participants themselves, before and during the meetings in Ohrid. 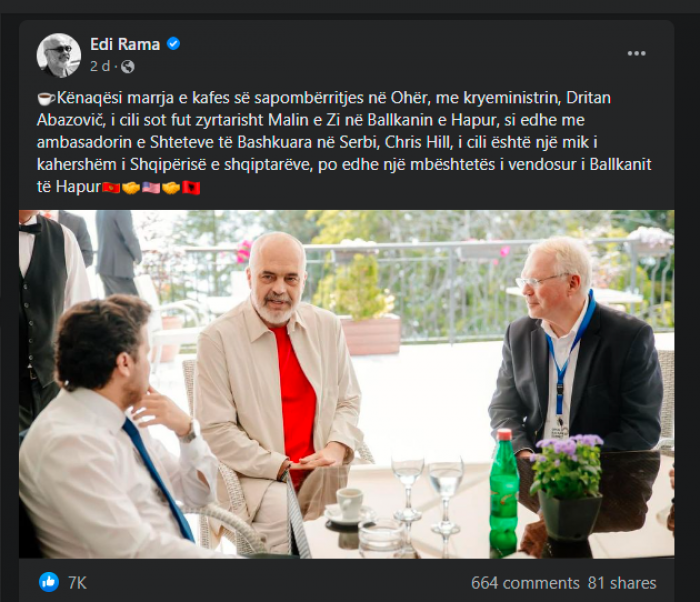 Regarding his participation in the conference, Abazovic made it clear that there will be no membership in the “Open Balkans” during the event organized in Ohrid. He said that he is only participating as an observer, although an agreement was announced regarding the project that shortens the distance between Velipoja and Ulcinj, with the construction of a bridge over the Buna River. He said in Twitter posts that the Western Balkans has a place in the EU, and Montenegro as a leader in integration is ready to be a positive example in this process.

Regarding these attitudes, media in Kosovo have distributed misleading headlines. 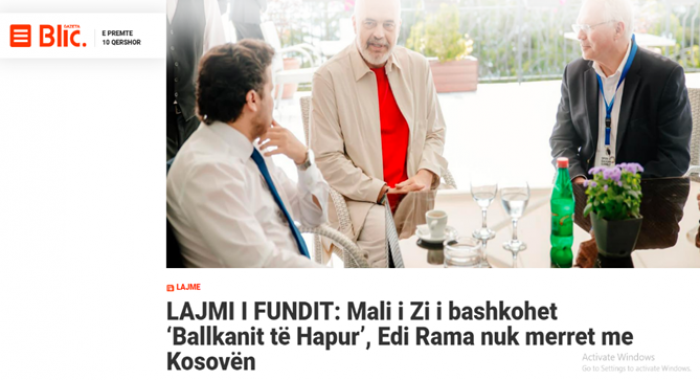 Gazeta Blic spread false news without confirming Rama's post where it is claimed that Montenegro has officially joined the “Open Balkans,” and stated in the headline that Edi Rama has not dealt with Kosovo. On the contrary, Rama mentioned Kosovo during the summit, saying that he respects the decision not to join the initiative.

On the other hand, Periskopi.com in the description of the article on Facebook, also claimed that Montenegro has joined the “Open Balkans.” 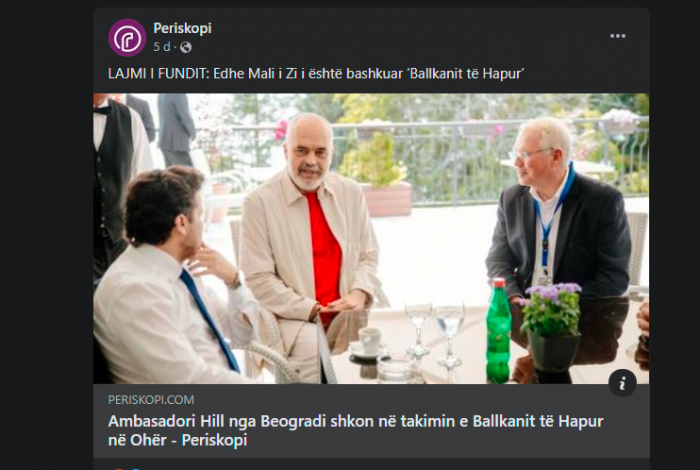 Despite the request of the United States, so far the Government of Kosovo has refused to join the "Open Balkans", for which the former Hoti Government had taken obligations from the “Economic Normalization” agreement of September 4, 2020, in Washington.

Apart from the fact that Serbia is the beneficiary of this project, the current leaders have also refused to participate on the grounds that regional cooperation should be promoted in the framework of the Berlin Process, which was launched in 2014 in Germany.

Manipulation of incidents in Serb-majority areas in Kosovo