Even three months after Russia's aggression on Ukraine, misinformation statements by Russian and Serbian officials on Kosovo have continued. The latest one came from Russian Foreign Minister Sergey Lavrov, who in an interview with "Sputnik" in Russia and broadcast by Serbian media has denied the Recak massacre in Kosovo. During the interview, Lavrov was quoted as saying that it had been "discovered" that the bodies of those massacred in Recak were not of civilians, but of soldiers whose clothes had been changed to look like civilians.

Lavrov made these statements in order to make a comparison between the crimes that took place in Bucha in Ukraine and the Recak Massacre that took place in Kosovo in 1999. As all credible reports prove, the case of Bucha is clear evidence that retreating Russian troops had undertaken a campaign of mass killings of Ukrainian civilians. It is also confirmed that the massacre in Recak was a premeditated action of Serbian forces on Albanian civilians in Kosovo. 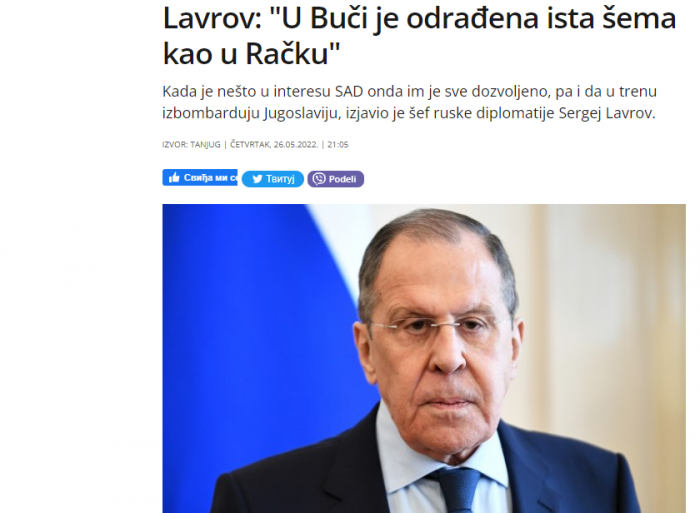 The US Ambassador to Kosovo, Jeff Hovenier, reacted to this statement by Lavrov.

"Those who deny the atrocities in Recak seek to impede progress towards regional reconciliation, democratic consolidation, and European and Euro-Atlantic integration," Hovenier said.

Hovenier also attached to his post two OSCE and UNDPPA documents, which substantiate the Recak massacre.

On other occasions too, have Russian officials drawn parallels between Kosovo and the annexed regions of Ukraine. Even before the military offensive against Ukraine, President Putin, during a joint Kremlin conference with German Chancellor Olaf Scholz, mentioned NATO intervention in Yugoslavia in 1999.

This is not the first time that Russian and Serbian officials deny the crimes of Slobodan Milosevic's regime during the years 98-99 in Kosovo.

The shooting that brought back the tensions between Kosovo and Serbia

The shooting of two young Serbs with firearms in Shtërpcë, just a few...